ARA [1] is an open source tool which is able to log your Ansible playbook runs, save them into a database and display them in an intuitive web interface. It integrates with Ansible using Ansible's callback plugin [2] in order to log your playbook run.

ARA can be deployed anywhere, and record Ansible playbook runs from multiple sources.

In this blog post we'll discuss in how to quickstart ARA and add it as part of your Ansible flow.

ARA as part of your stack

ARA is production tested and is a big part of OpenStack upstream CI initiative.

One of the downsides of Ansible is that all of your Ansible executions are only logged to output. There is no native way to keep a record of an Ansible run.

Ansible Tower [3] or its upstream project AWX [4] is a different product which leverages Ansible and enhances it with many additional capabilities (like recording executions).

Compared to Ansible Tower, ARA aims to solve a single issue, provide an interface to log and view Ansible playbook runs and doesn't require any additional complex deployments or maintenance.

ARA is a python tool hosted on PyPI [5], it can be used as part of a [6] to minimize effect on system.

For a more in-depth guide on installing ARA, refer to its documentation [7].

Install ARA via pip(make sure Ansible is installed):

Configure Ansible To Use Ara

ARA integrates with Ansible using callback plugins, which can be defined via configuration file(ansible.cfg [8]) or via environment variables.

Once a callback plugin is used, ARA also provides additional Ansible modules ara_record [9] and ara_read [10] which enhance its capabilities.

By default, ARA web interface will be started on 127.0.0.1 due to ARA_HOST envrionment variable's default
In order to change the bind, assign a new value to ARA_HOST

A web interface is a part of ARA, it can be launched using the ara-manage CLI:

After each Ansible playbook run, the record is saved into a database.

We'll focus on the web interface, CLI exploration is out of scope and can be viewed in ARA's documentation [11].

A web interface representing all the records is available: 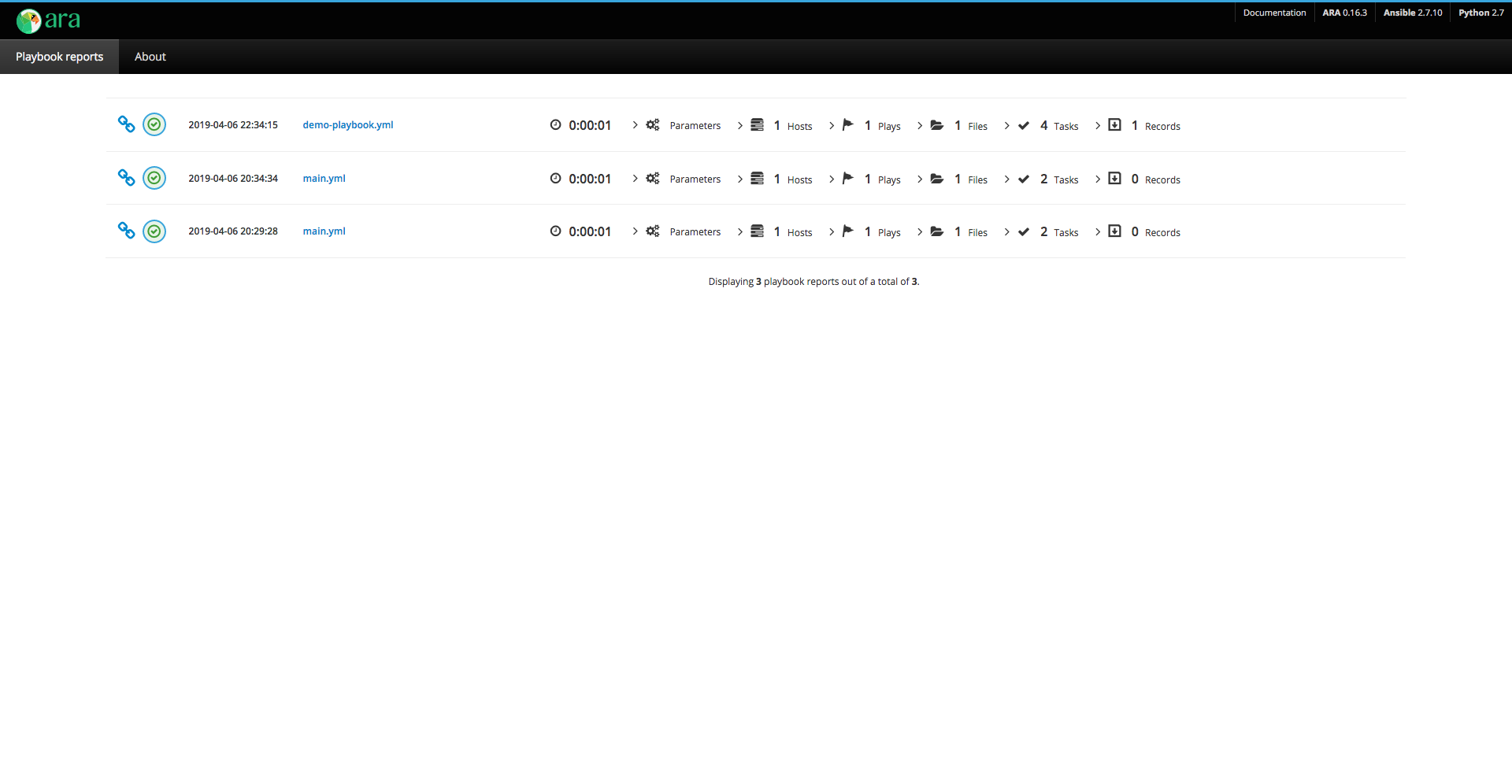 You can view the playbook's content by clicking its name: 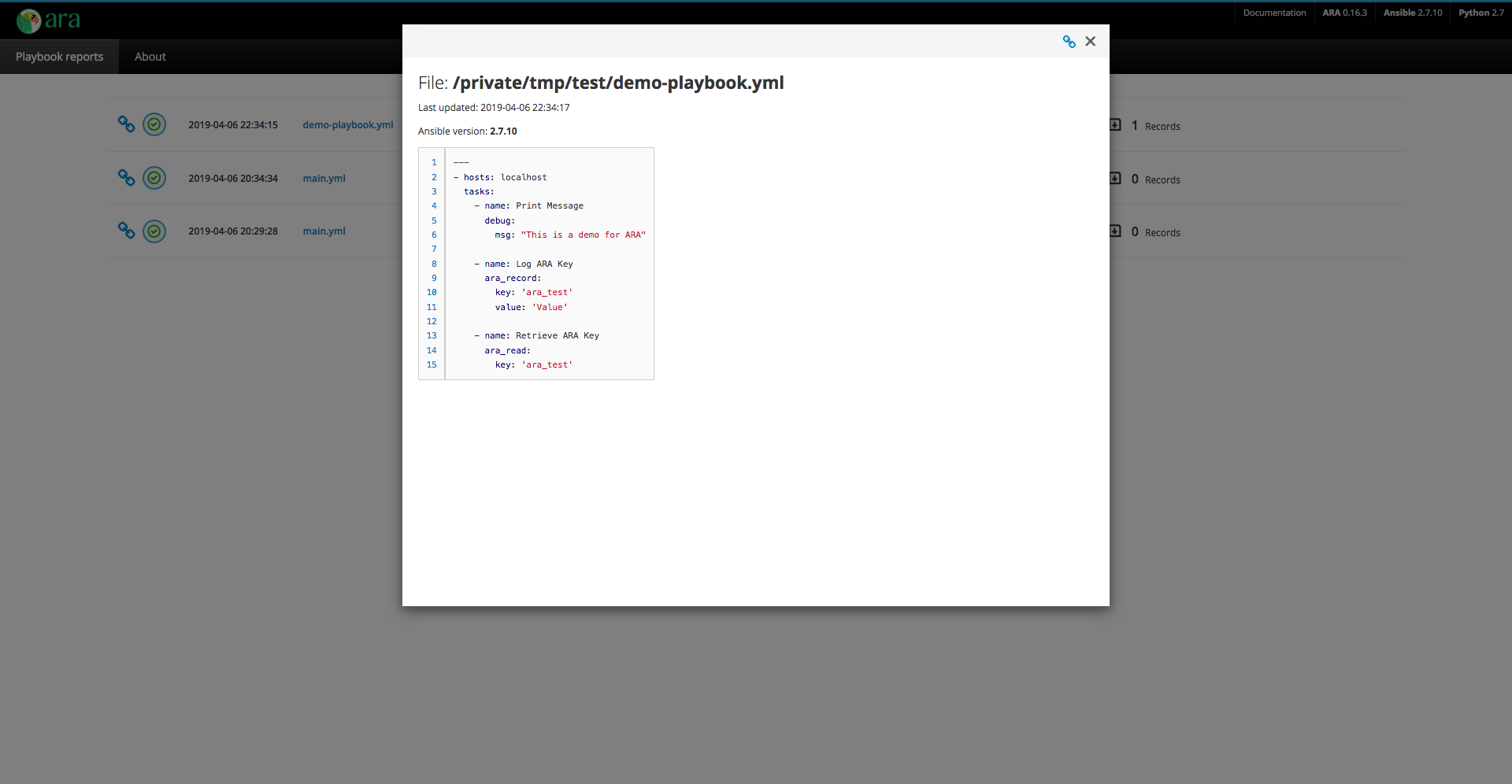 All Ansible variables are logged and can be viewed by clicking on Parameters: 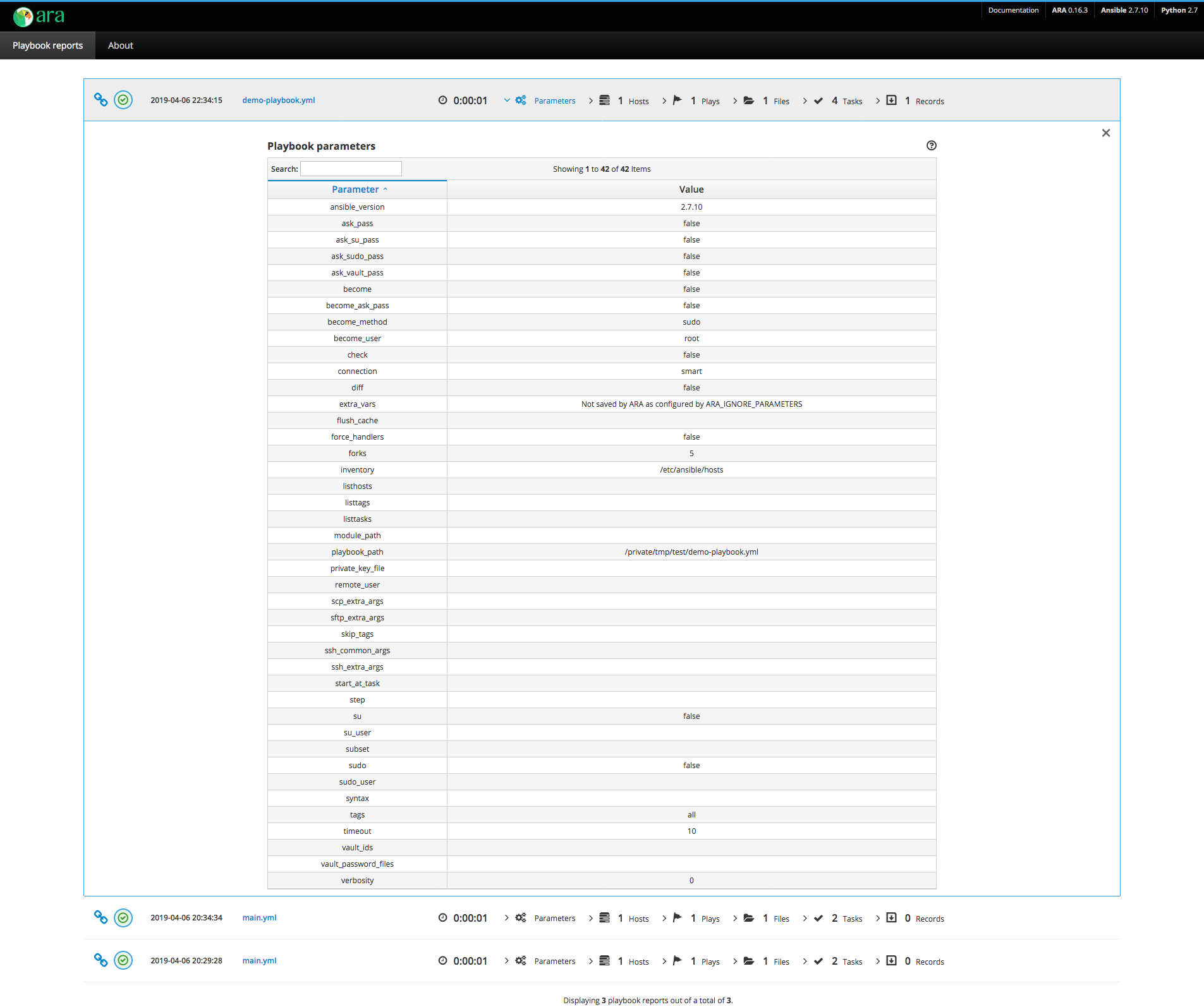 All Ansible hosts that were used in the run can be viewed by clicking on Hosts: 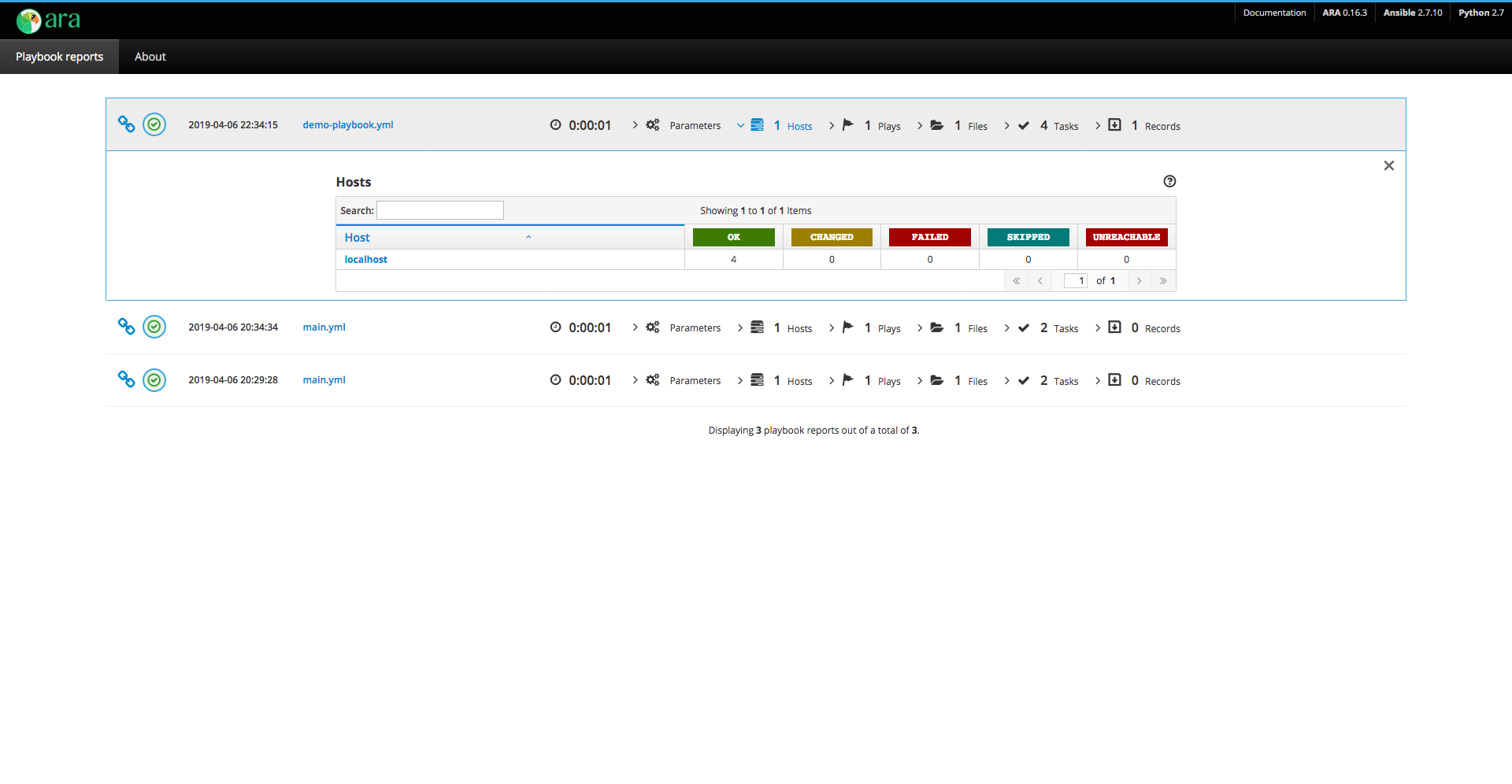 All Ansible plays that were performed in the run can be viewed by clicking Plays: 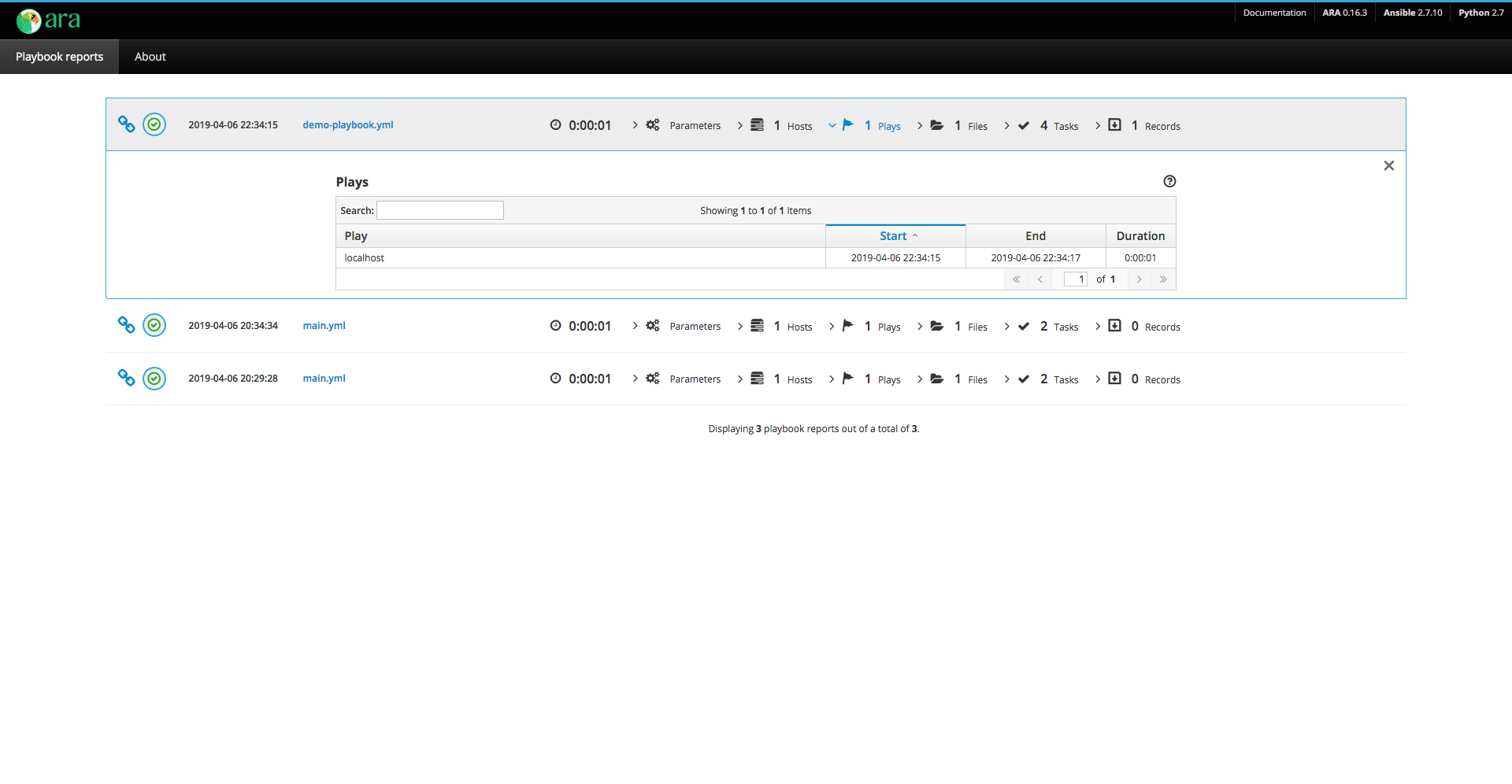 All the files that are part of the playbook can be viewed by clicking Files: 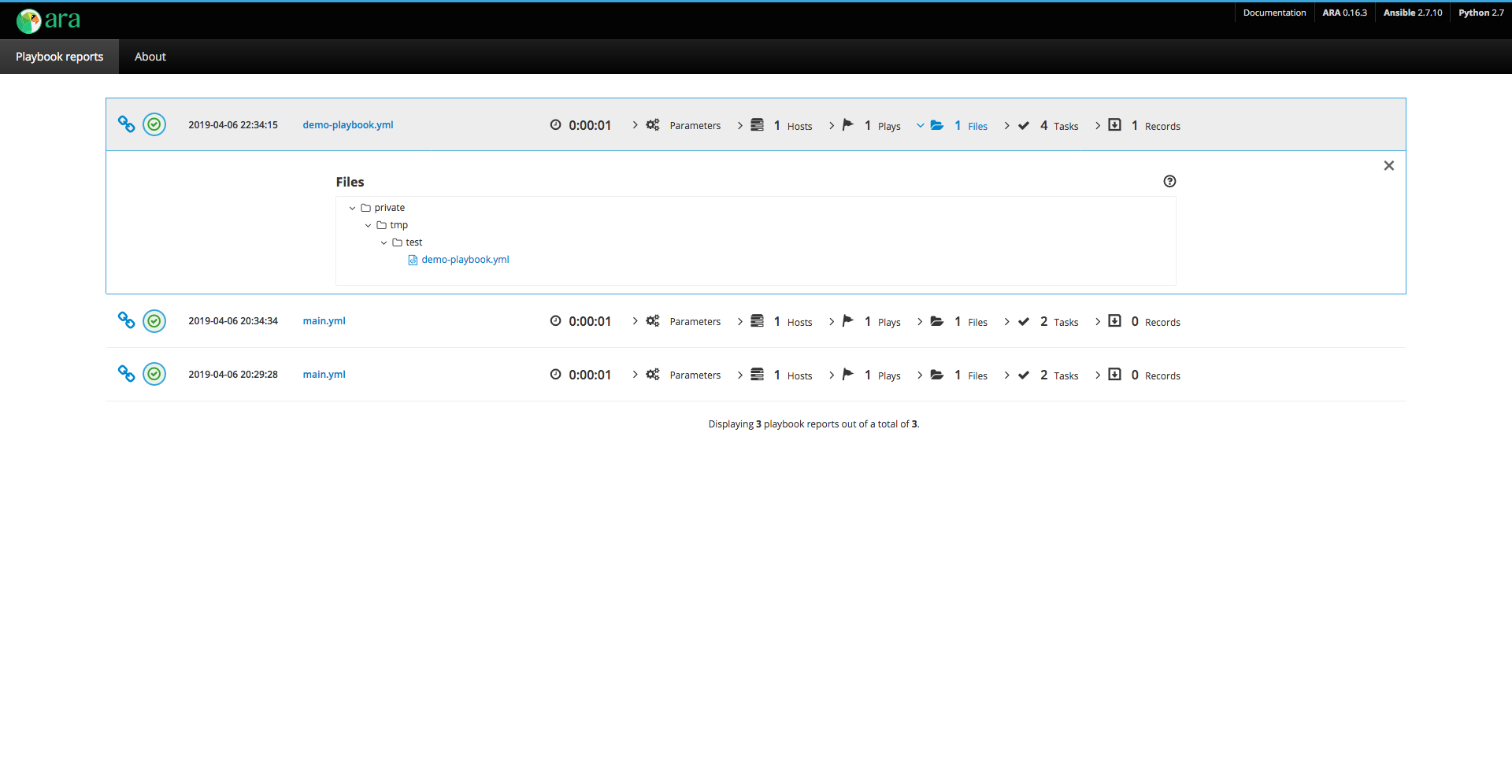 All tasks which were performed in the run can be viewed by clicking Tasks: 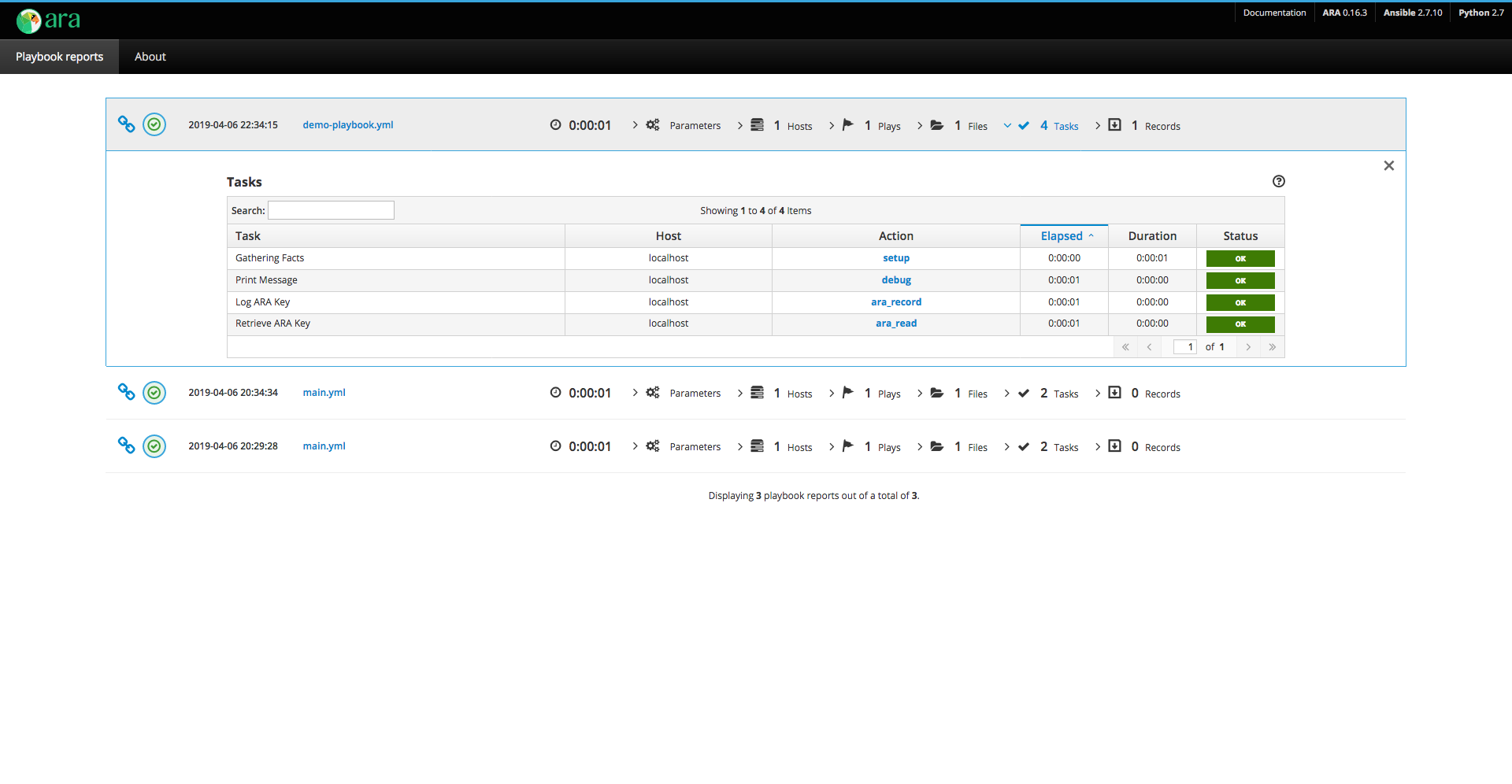 The result of an individual task can be viewed by clicking an its entry in the Status column: 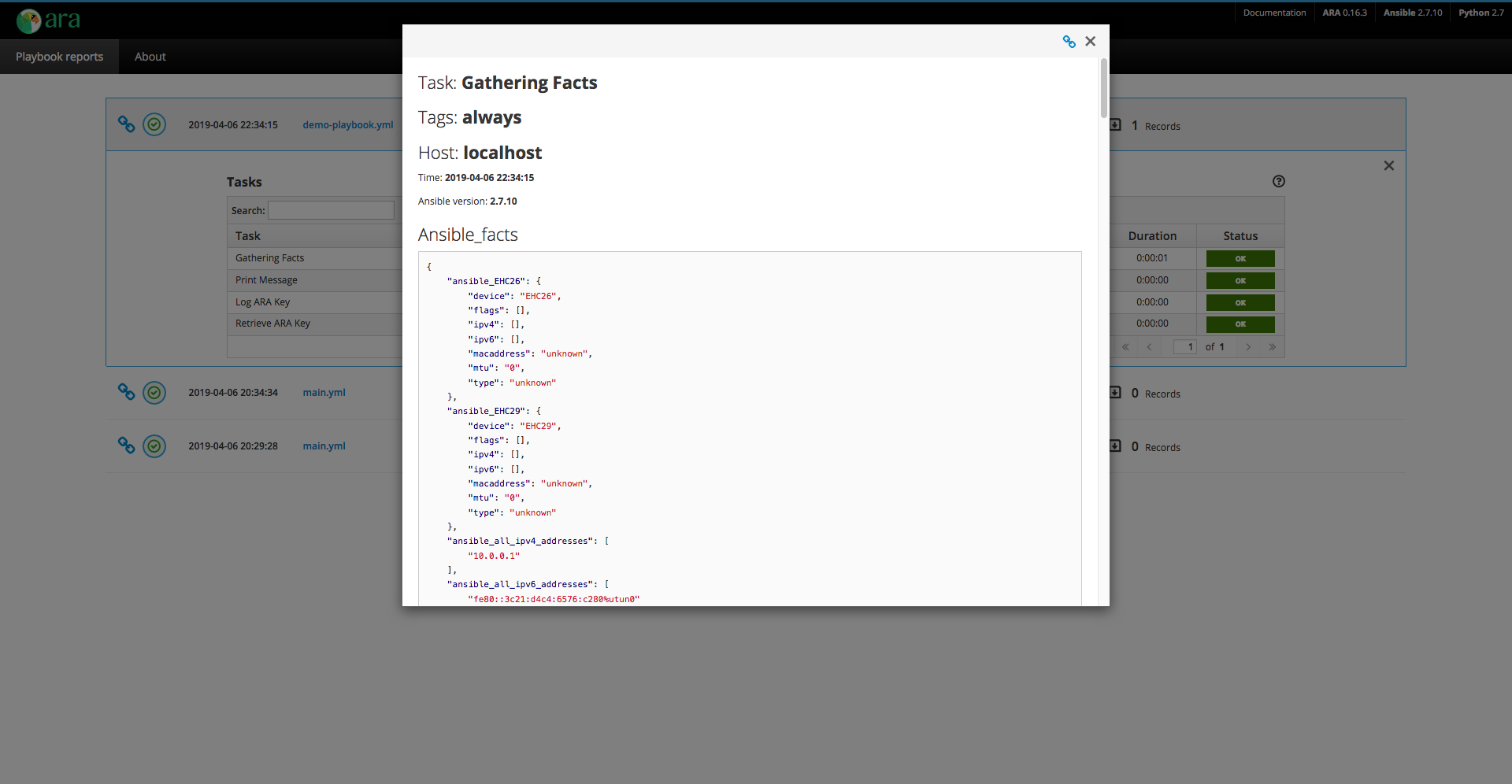 ARA records are special variables that can be registered and accessed during run. Those records are logged and displayed as part of an Ansible run record. 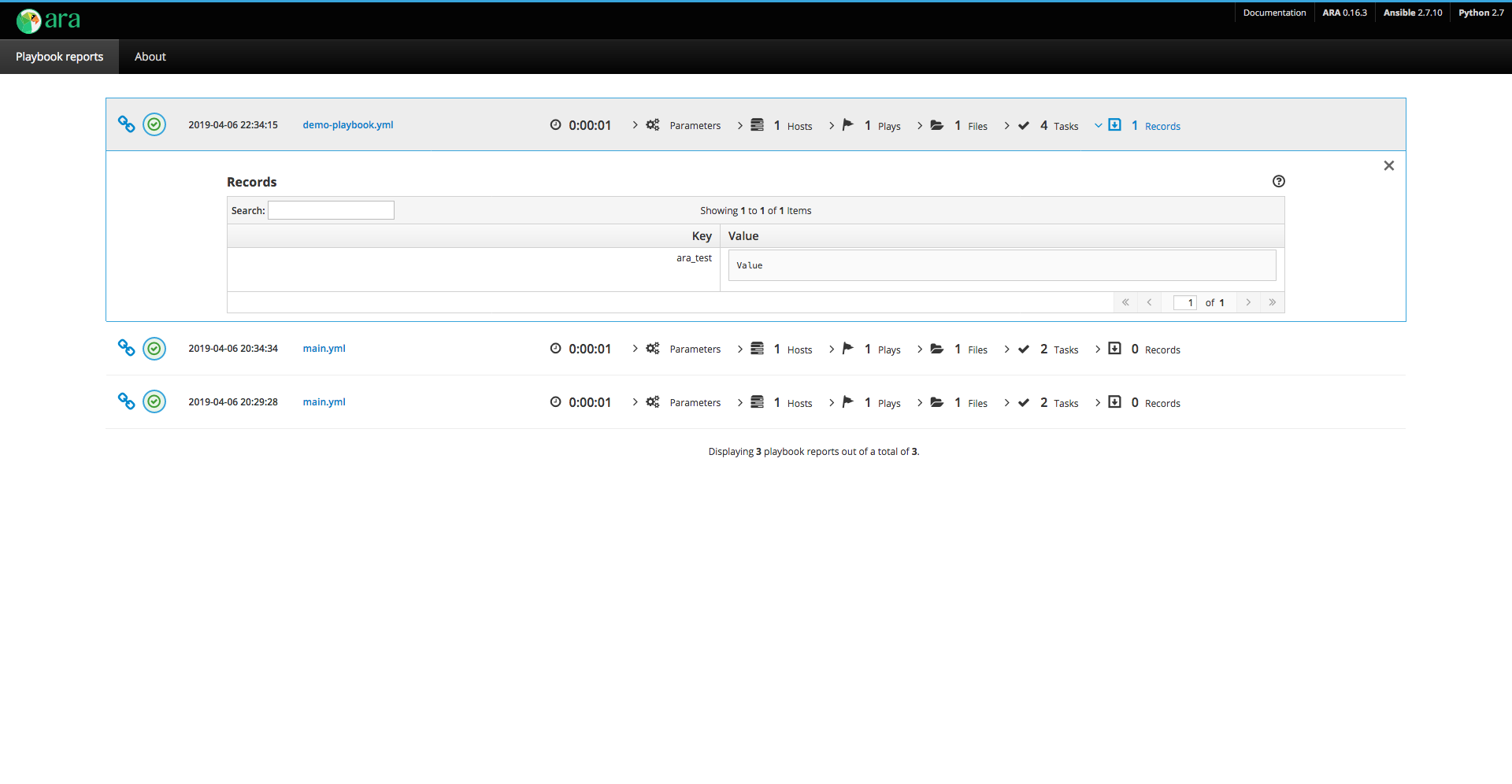 ARA is a great addition to your Ansible flow, it's easy to setup, scalable and decentrailized.